Horseshoes: What Are Their Purpose?

20 Mar Horseshoes: What Are Their Purpose?

Posted at 18:17h in Uncategorized by Matthew Jones 19 Comments
Share

What Are Horseshoes For? And Other Common Questions Answered by Our Experienced Staff

Have you ever wondered why horses wear shoes? What the purpose of horseshoes are? Well, we at Mountain Creek Riding Stable are here to give you some quick answers! The Purpose of Horseshoes

Horseshoes are quite ubiquitous: it would rare to come across a person who does not know what they look like. But why are they a thing? And why is it that nearly all horses (except wild ones) wear them?

Horseshoes are used to help aid in the durability of the hoof on working horses. The hoof itself is made up of the same stuff as your fingernail, called keratin. However, the hoof has a soft and tender inner part called the frog (circled in the picture above) that can be injured. The hoof will naturally wear away when horses walk so adding a shoe onto the hoof helps to diminish that and keep the frog in healthy condition. Of what material are horseshoes are made?

Horseshoes are made out of steel in most cases, though there are some exceptions to this. Racehorses usually wear aluminum horseshoes because they are lighter and thus perform better when speed is the top priority. There are also “boots” that horses can wear in the case that they have a hoof or foot injury. These “boots” are made of rubber and have a rubber horseshoe built into it that provides a much softer walking surface and more significant support. How horseshoes are put on the horse

People who put horseshoes onto horses are called farriers (also spelled ferrier). Farriers use nails (like the ones pictured above) to affix the horseshoe to the hoof. Like we said before, horses’ hooves are made of the same material as your nail and, just like when you cut your nails, the horses don’t feel anything when affixing the horseshoe to the hoof. Once the nails are put through the outer edge of the hoof, the farrier bends them over, so they make a sort of hook. They will then file away the sharp points that are left and a part of the hoof to ensure a good fit. As the hoof grows out it will eventually overlap the shoe which is how you know when they have to be re-shod. 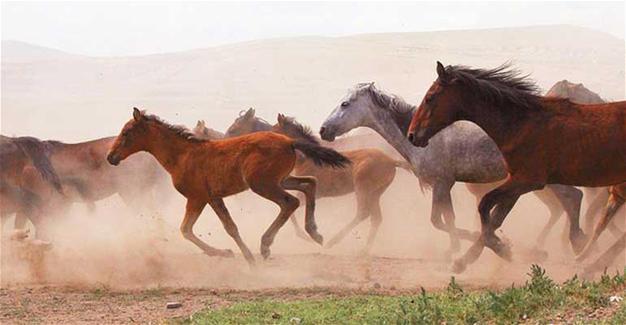 Now and then you may come across a horse that doesn’t have any horseshoes. Additionally, wild horses don’t wear shoes. In the working world, horses who don’t wear shoes usually as a result of having a problem with their feet. Sometimes their hooves are too brittle, or they may have broken off a piece of their hoof, and so the shoe could not be adequately affixed. These horses can still do trail rides or work the farm, but they will have greater limitations on how much they work.

The reason wild horses can exist without shoes is twofold: firstly they do not “work” as hard or as often as a horse with an owner. Therefore, they wear away their hooves slower than the hooves grow. Secondly, they do not have anyone to look after their well being, so if they have an injured frog or another situation where a shoe would be put on an owned horse – they have to deal with it. Why horseshoes are essential for trail riding

Horses that do trail rides are called hack horses and for them shoes are of utmost importance. Mainly when the trail rides are done on some paved surface or hard-packed ground (like that of the Grand Canyon), the hooves would wear away faster than they grow. This can lead to the horses being unable to work. Well maintained horses will always have shoes to protect their feet and allow them to do the 8-5 grind.

In addition to the above, we at Mountain Creek Riding Stable put horseshoes on our horses for the anti-skid properties. Each of our horses gets what is called “Drill Tech” added to their shoes, which is made of a substance called carbraze. Carbraze is a mixture of tungsten carbide particles in a brass/nickel matrix. As the matrix melts, it adheres to both the tungsten pieces and the steel of the shoe. Once it cools, the tungsten pieces stick out and provide extra traction on slippery surfaces, kind of like ice cleats for humans. Safety is the most important part of our business, and this traction makes all the difference during the winter months.

We hope you learned a thing or two about horseshoes and if you have any more questions – feel free to contact us!